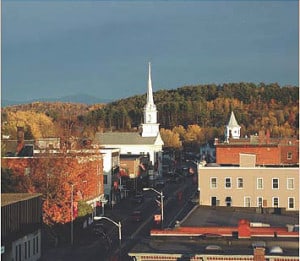 at do you mean when you say ‘small town church?'” I have received this question more than any other as I attempt to share my research and findings with people, and ask scholars from around the country their opinions on small town ministry. How does one go about defining small town churches?

Is a small town a few hundred or a few thousand? What if the town is near a major city but has that “small town feel?” To someone who grew up in Houston (like me) a small town might seem like 50,000 people! Zeroing in on what “small town” means helps provide focus and clarity for my project, and helps address the challenges of small town ministry.

In sociological terms, defining the term “rural” is critical before proceeding.  The working definition many American sociologists use comes from the U.S. Census Bureau.  Just hang with me for the next few sentences! Here we go…

A “Nonmetro Non-core” county is a nonmetropolitan county without a single core area containing at least 10,000 people.  A “Nonmetro Micropolitan” county is a county with at least one core city of 10,000 to 49,999 persons.[1]  These core population centers act as social hubs for the surrounding small towns and villages.  Non-core counties are the most rural of all counties, many having less than 10,000 residents in the entire county.[2] The county my church is in has just over 10,000 residents, making us a Non-Core county.

Most people in society live in urban settings, and “even though rural areas may only contain 15-30 percent of a nation’s population they typically contain most of its land, water and mineral resources.”[4]  What does all this mean when it comes to defining “small town churches?”

What do you think of when you hear the word “rural,” or the phrase “small town?” Do the numbers add up for you? Based on popular definitions of “rural,” what observations can you make about small town churches? I look forward to hearing your thoughts and comments below.

3 thoughts on “Defining Small Town Churches…”What does that even mean?””